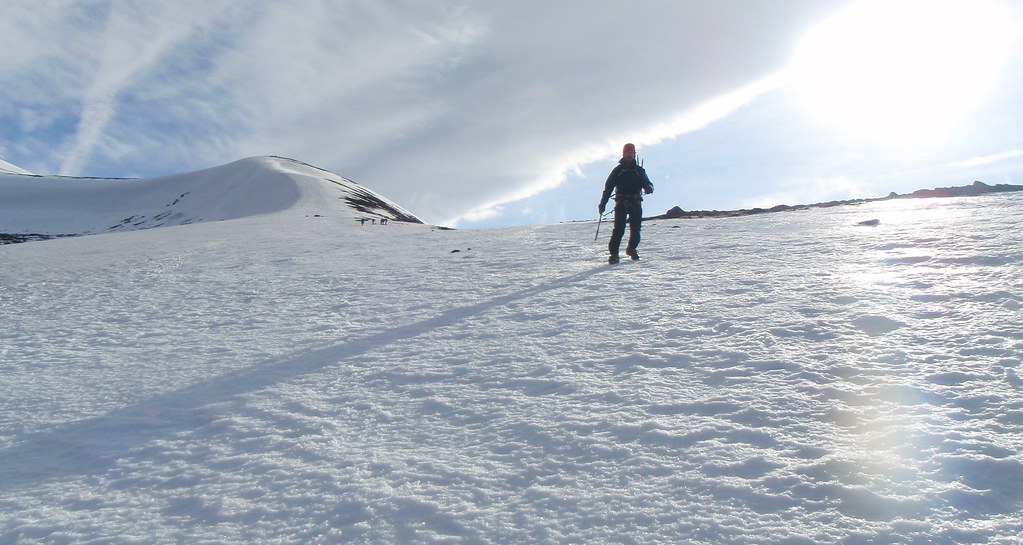 I tell you the key is this. In Scottish winter climb, they have their own rule. If you ignore it, then you will likely have to pay the price. Instead, understand it well, play by it, and you are almost guaranteed to have a good time even in these recent years of warmer winter than used to be, as follows.

Note: Each of us made our own way to Scotland this time. The number of day described here is based on my time. Ed and Zoe had got there days before me.

1. Don't waste a nice day — climb when the condition and weather let you.

On Day 2, despite we had gone to bed (in a campsite) fairly late after midnight the previous day, we drove ourself to get up early, pack the stuffs, and went off climbing. We did an absolute classic, Dorsal Arete, a first winter climb in Glen Coe for me and the first winter climb after a long break for Ed. Nice one.

2. Be flexible in choosing the route.

On a day with a considerable avalanche risk, it is not a good idea to climb a gully route. Similarly on a windy day, a ridge route is not a wise choice. On Day 3, when the risk of avalanche was considerable, we climbed Ledge Route, a route on a ridge. In fact due to accumulation of snow, the route was almost a grade easier! The good first grade II experience for Zoe!

3. Don't miss the rare chance, when routes in the lower altitude are in condition. 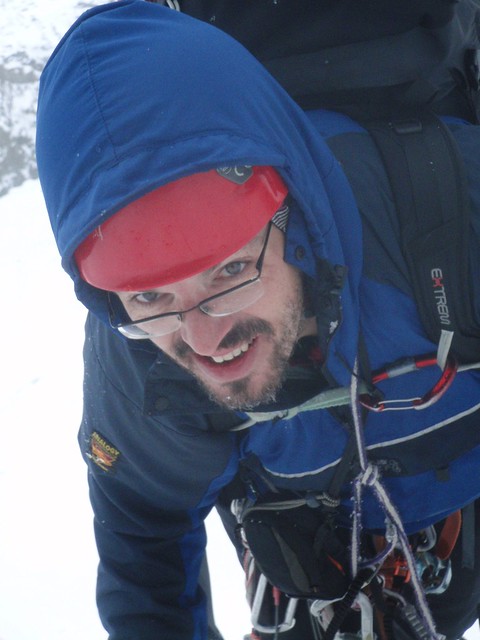 In the first few days the routes in the lower altitude were in condition, whereas the forecast said it would warm up dramatically the following days. Therefore, on Day 4, Ed and I climbed Vanishing Gully, finishing off on Tower Ridge. First grade V for Ed! The ice in Vanishing Gully vanished in the following days as predicted, and is unlikely to come in condition again in this season. We were glad we managed to snatch it while still in condition!

4. Have a courage to give up when things go wrong.

Winter routes are climbable, providing one is compenent to do them, as long as

In other words, if any of these goes wrong, it is not sensible to do the route in mind. On Day 5, everything went wrong as predicted, so we had an easy rest day, which is not bad after 3 days of intensive activity.

5. Be vigilant in weather forecasts and be mobile.

To satisfy the above-mentioned condition, it is sometimes the case the eastern Scotland is better while the west is not in condition, or vice versa. It all depends on the highly changeable Scottish weather. Keep the means of getting the latest weather forecast (MWIS and SAIS are essential), and never mind driving from east to west or vice versa to look for the best option. On Day 6, we drove to Cairngorms, taking 2 hours. As predicted it was much better than west Highland. After all we bailed, as the temperature was still too high. Nevertheless, we still did something; Zoe gave a go to her first grade IV (remember her hardest had been grade II, done just a couple of days ago!), even though the condition was far from perfect, as we successfully secured the very safe way to do it! 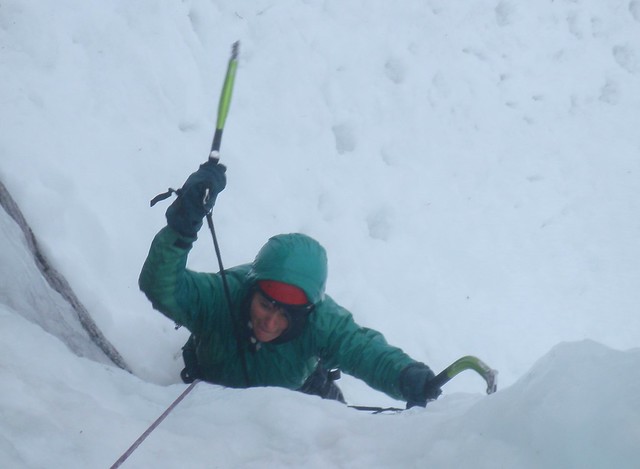 Zoe climbing Aladdin's Mirror Direct, Coire an t-Sneachda, Cairngorms. Zoe's first experience of proper ice-climbing (IV 4). The water is gushing and splashing, as the temperature is about 6 degC. She got soaked wet because of that... Belayed by Masa in top-rope. 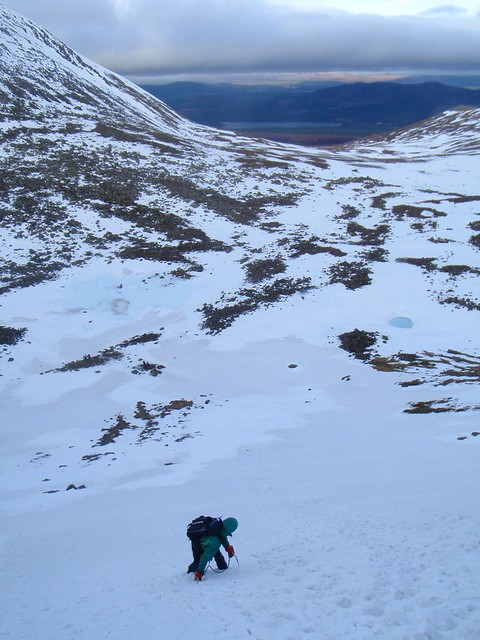 Climbing down the approach slope of Coire an t-Sneachda
10年 ago ago at , Highland, Scotland, United Kingdom 投稿者 Masa Sakano. cs

Climbing down the approach slope of Coire an t-Sneachda.

6. Be aware of the direction of the wind, as well as the strength.

Winds in Scottish winter, particularly on the ground higher up, are often ferocious. On Day 7, Ed and I took Pony Track in the south face of Ben Nevis (after we found the plan A did not work). A mistake! The forecast said the wind would be southerly and strong with occasional shower. It was spot on... We were beaten by wind, rain and hail even before we reached the summit ridge. The routes in our mind must have been in condition, but the approach path we took was wrong.

7. Go high if things are uncertain.

In theory the temperature lowers by 0.55 degC for every 100 metres of ascent in average. Hence the difference in the temperature for the altitudes between 800 and 1200 metres is more than 2 degrees, and this difference is often critical in the British Isles. During Day 5–7 there was a considerable thaw. So, on Day 8, ex-Bowliner Luke and I went to Indicator Wall, not minding a longer walk-in, hoping the routes were in condition — the wall being at 1200 metres at its base, it is the highest climbing venue in the country. We were right. The whole Indicator Wall was plastered with snow and ice and was in good condition. We enjoyed a grade V there, with an extra bonus of topping out directly to the country's highest summit (our final belay anchor was the triangular pillar of Ben Nevis!). 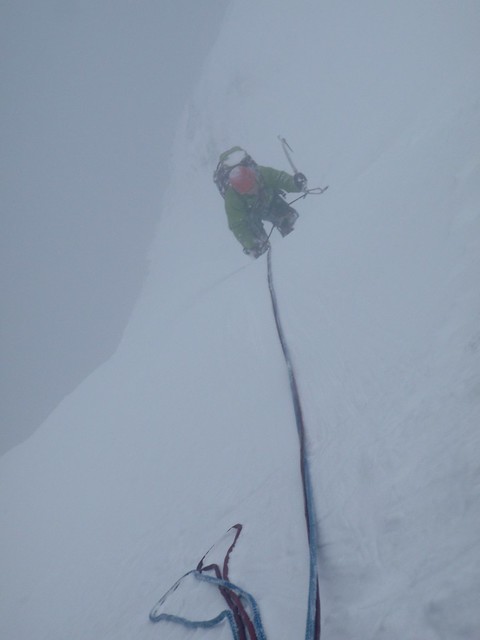 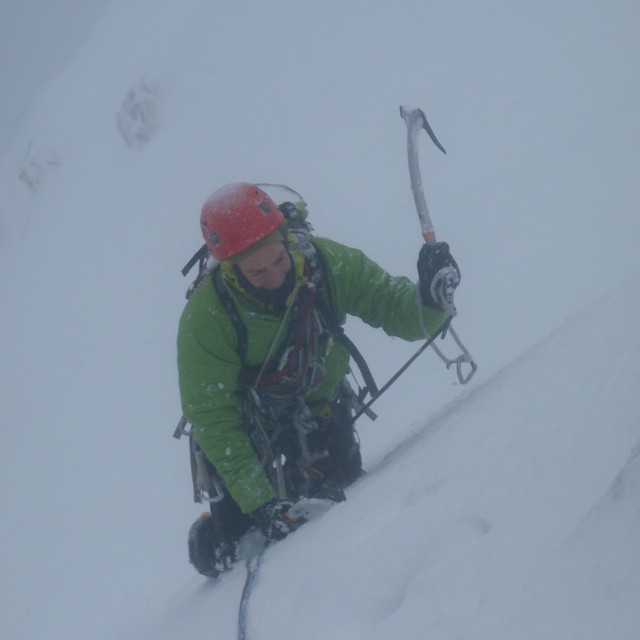 Would not succumb to spindrift
10年 ago ago at , Fort William, Scotland, United Kingdom 投稿者 Masa Sakano. cs

Would not succumb to spindrift!

8. Finally, give plenty of time allowed if you dare use public transport...

I took a train to Fort William. It was delayed by 6 hours at the end. That is why I arrived at Fort William at 22 instead of 16 o'clock. The train or coach journey is nice as you can be just relaxed and the carbon footprint is much lower than car journey. But it is worth checking Plan B beforehand in case you miss the connection due to delay, which is, I have to say, not rare by any means in this country...

As such, play by the Scottish rule, and you will have a great fun! Try it! 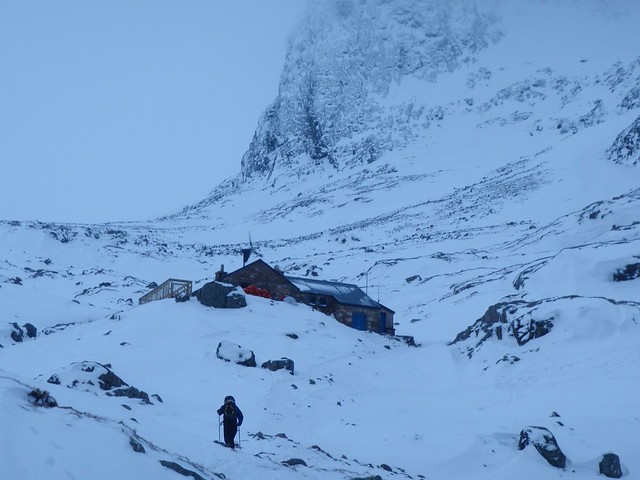 CIC hut, Ben Nevis, in a winter morning. All the snow around here melted the following day. 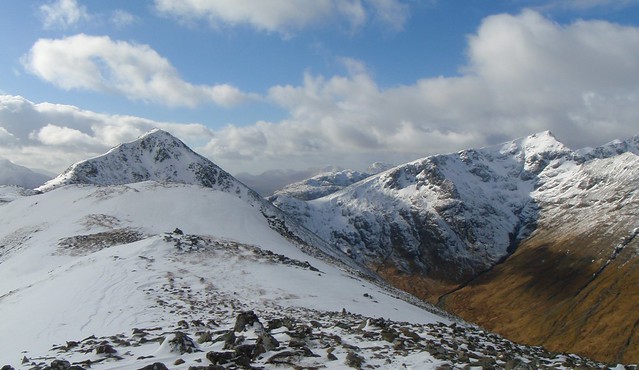