As such our activities were varied, but we had two things in common — one is we really enjoyed ourselves in our outdoor activity in Snowdonia, and the other is we ended up nursing our sore bodies after the tough weekend! 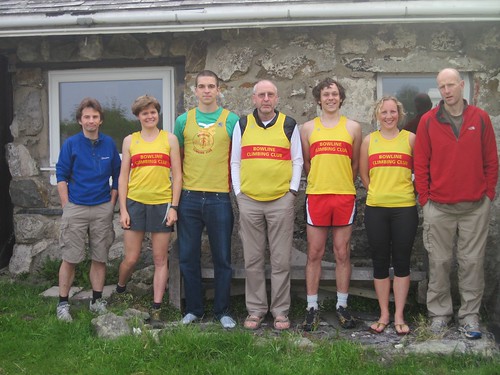 Shane, Zoe, Matt, Paul, Robin, Louise and Dick from the left before a busy day in the Welsh hills. Those in the Bowline vests were running the Welsh 1000m race and Shane and Dick were doing a night leg in support of a Paddy Buckley round. Taken by Ed. 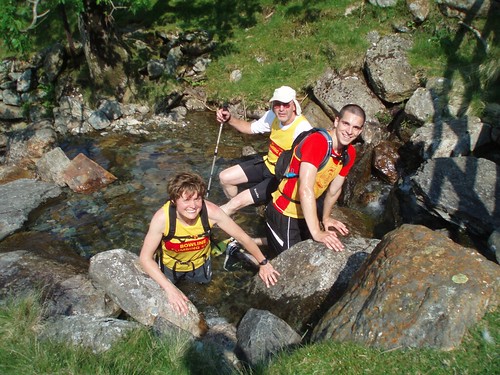 Ice bath on the long walk down (to Llanberis from Snowdon summit after the race). Taken by Louise. 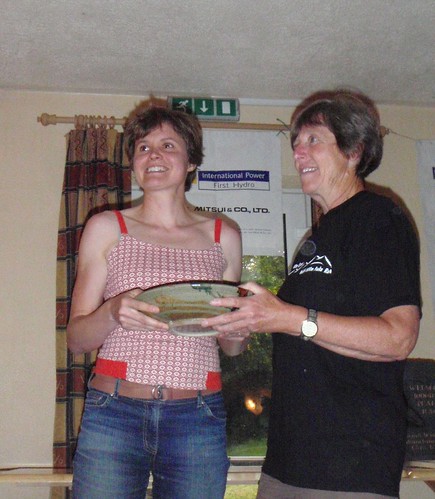 Zoe came to the 2nd lady in Welsh 1000m Peaks Race 2011, and is awarded with a nice plate from a local pottery.

In Welsh 1000m Peaks Race, the best was Zoe Procter, who came to the second among females, after the top effort involving drinking water from streams (to save the weight of water to carry) and even licking her own arms all over to supplement the much craved salt! Louise Richmond did pretty well, too, finishing at the very respectable fifth among females in the short course.

Another notable is Paul Parker. He declared after the race the retirement from hill races after 35 years of career in races across the country, while his joints are paying a toll of years of abuse nowadays. It may be sad, but we should rather congratulate him, a former sub-three, for his years of hard efforts as a runner with the finale of completing this hard race!

I should note that Paul is not retiring from running. He will run regularly, if not for races. And he still is an active climber, too. The following day of this hard race (yes, the immediately following day), he set off earlier than any other to take a beginner Matt to climb classic VSs in Tremadog. Bless Paul! 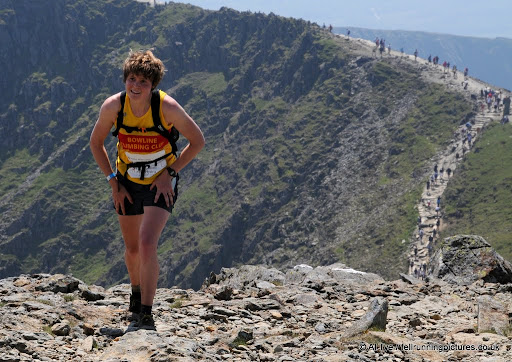 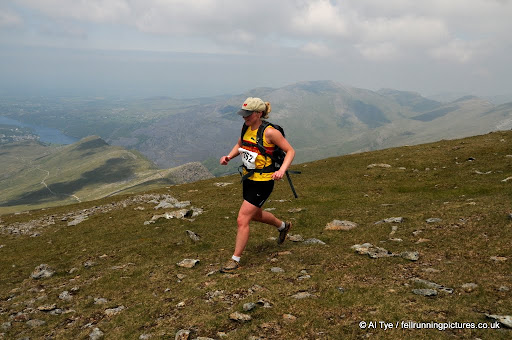 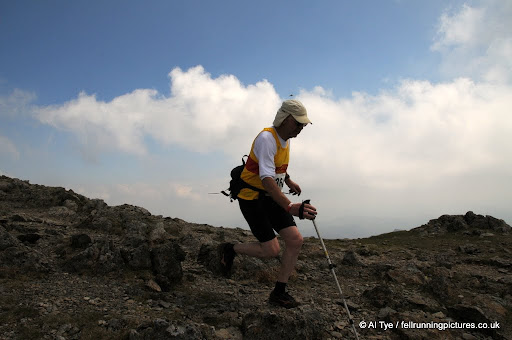 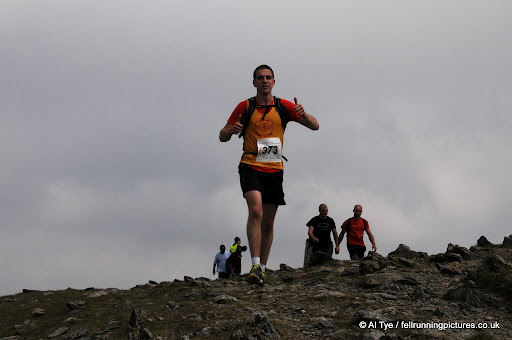 Resurrection in Dinas Gromlech (Cromlech). Welsh classic solid E4 on fantastic rocks, situated between the ultra-famous Cenotaph Corner and Left Wall. Since I onsighted Left Wall with Direct Finish last year, which I felt to be not too bad, it has been at the top of my wish-list as my first E4 onsight attempt.

Now the time is come to give it a go. I have prepared fairly well. Decent mileague on real rocks from grit, granite, limestone to slate has been made in the last 2 months. My finger strength is as good as it has ever been. To prepare and condition, a double session with an emphasis on finger power-endurance was done last Tuesday, another double session for bigger-muscle and cardio on Wednesday, technical onsight drill on a sustained steep route (Zombie in Willersley) on Thursday, cardio work-out to enhance the recovery on Friday — and finally the day (Saturday) is come with a good weather.

After warming up on Cemetery Gates in the crag, I have to say I was nervous and did not quite know how to sort out my head. However there couldn't be a better opportunity. I got on the route. 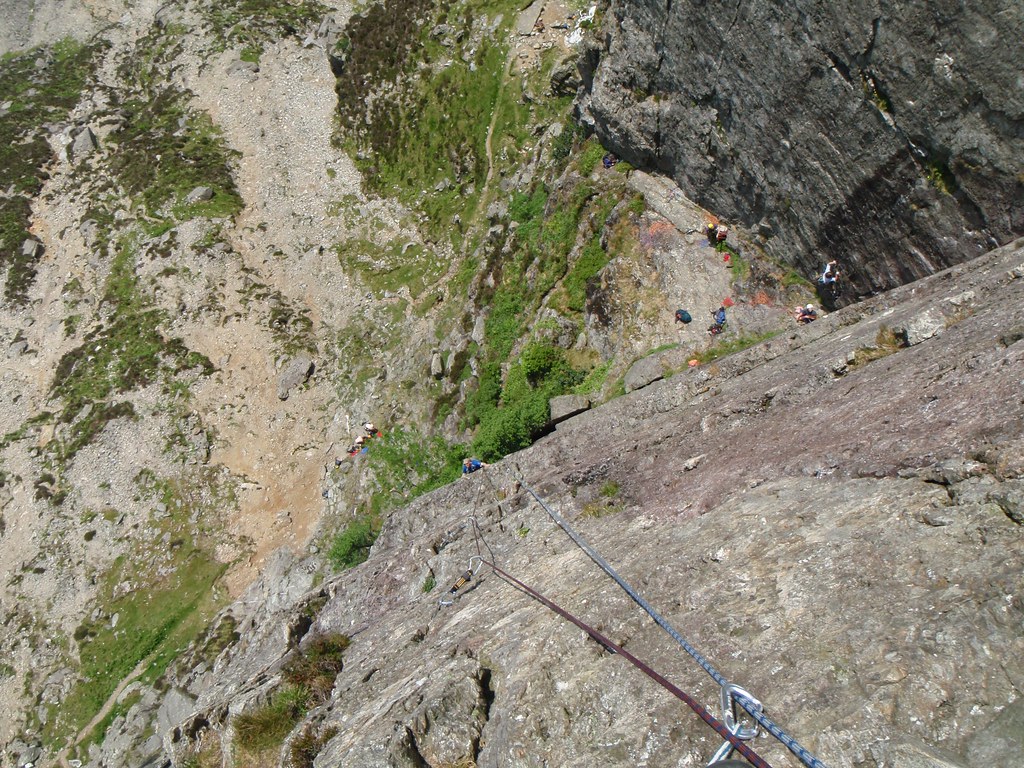 Ed seconding Cemetery Gates, Dinas y Gromlech (E1 5b). A climber on the right is on Resurrection.

I found initially holds were actually bigger than I had expected. A good sign. Then eventually a smooth part of the wall is encountered. Yes, it is E4. What can I expect? After much thought, I executed a rock over, and it turned out it was much easier than I had anticipated. I should have done it more promptly to save the strength, rather than pointlessly hesitated for some time. I need sort out my head.

After series of more difficult climbing I reached a (fingery) jug some 30 metres above the ground, perhaps not in the most stylish way, but I have managed, and that is what matters. I arranged pros and breathed deeply.

Now ahead is the crux. 6 or so metres of tough sequence with no gear (to the left, the original finish). My fingers are feeling a considerable fatigue by now. But the top is so close. I have climbed well so far, and am beginning to feel the confidence finally I can do this route to glory.

I see a pinch hold on the left. I can possibly reach it with a big span, if I swing the full body to the left with a powerful right-hand sidepull? It is not a good idea to wait too long here — a jug I am holding on to is only a jug in the E4 term — I should not make the same mistake as I did early in the route, that is wasting my energy. So I launched myself.

It got immediately apparent the planned tactics would not work, so I improvised high side-placement for my right foot for balance, used far smaller crimps for both hands, and finally reached the left-hand hold. A doubt crept in if I could complete the move. My body is well stretched and could not see any footholds. But it was too late to reverse, I have committed. Holding the small holds with both hands to death, I swang to the left with both feet cut loose momentarily. Now the next jug is just a foot or so above. So close, yet so distant… And next moment I found myself to be in the air. Gutted, absolutely gutted… (My belayer Ed later said the whole crowd in the crag was looking up at me ranting in the air.)

Then the second attempt. I replanned the sequence carefully, and went for it. It turned out the sequence did not work at all, I having learnt nothing from my first attempt! Stupid of me! But this time I knew the rock features better, and managed to reach the jug a foot above the pinch hold. Unfortunately it was not a jug… It was better than other holds, but was still pretty fingery and no more than 2 joints of fingers could be used. And as I had known, the footholds were not good at all. I expected it would be all over once I took the jug, but it was not. I was very well aware that my fingers are slowy failing. Adjusting their positions did little help, and eventually I was air-borne, again.

I reached the high-gear point again. I do feel my arms/fingers are pretty pumped now. In fact even to reach this high point after falls (6 metres ish) repeatedly was a killer as it was, though easier than the moves I am facing now, sustained 5b to 5c climbing.

However, I won't succumb. At least, before I give everything I have got. This is the route I have dreamt for over a year. How could I?

I carefully read the best move sequences and plan B and Cs with all my concentration this time, while hanging on rope. Use of feet is vital. Success depends how much weight I can take off fingers/arms to my feet, as I don't have much strength left in my arms. I knew this would be my last attempt. 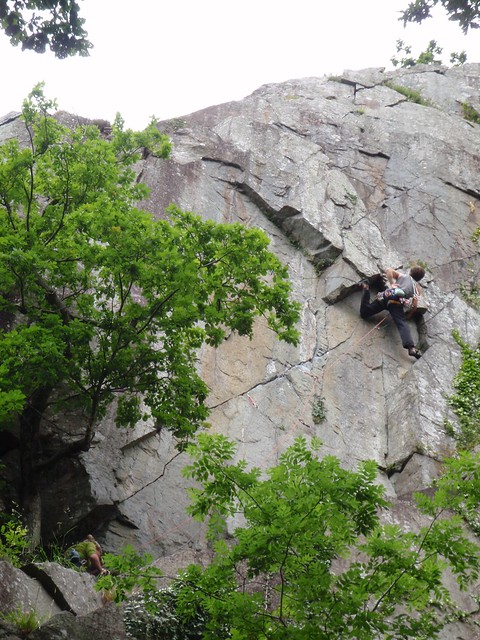 Super Egyptian by Robin on Daddy Cool, Craig Bwlch y Moch, Tremadog on Sunday (the following day of the race).

I finally launched myself with much more decisive footworks this time. I reached the fingery jug and successfully matched both hands on it. The footholds being marginal, the move ahead was still hard. but I managed. The trouble was the finger hold I reached was not as good as I optimistically expected. My fingers were failing, badly. What weak fingers of mine…

The top gear, although held my previous falls, was not so trustable. The cam, which held the falls, moved every time after a fall, to the extent a cam unit was not touching the rock (indeed I later found out the cam this time popped out just by a rope drag…). Though backed up with a sling around spike and a micronut, I was not 100 per cent sure, particularly for a fall at this point, which is a couple of metres higher than the previous ones. I can't fall off.

The survival instinct kicked in. I clambered up to the next hold, while a shout like Adam Ondra came out of my mouth. The hold is better, but still not good. My fingers are failing and failing. Make a micro-adjustment in my finger positions to get the most of them. Adjust foot placements to get the most of them. And launch to the next hold. It was finally a better hold, more like a jug, for a side-pull.

A metre above was a not-so-easy top-out. But for a man with a survival instinct, it was all right.
I topped out, at all last.

I almost could not believe to see myself at the top of the route. I could have fallen off any time in the top crux section. Yet I have somehow managed to summon all or even more than I have got. I knew I had to, and was determined to do, but in fact I did not belive I could, yet I did! It is a very rare moment of pure satisfaction.

I have heard an account about the third ascents of Equilibrium (E10) by James Pearson and of Rhapsody (E11) by Steve McClure — they had to give everything they had got, in order to make it. My climbing on Resurrection of course does not carry, unlike theirs, any national significance whatsoever (and it was even not a clean ascent). However climbing is a very personal thing for me, and my experience on Resurrection, as far as I am personally concerned, rivals those by Pearson and McClure. I am so content. It was, even though technically a failure, one of the best rock climbing experiences I have ever had.

9 June 2011
Masa Sakano,
with thanks to Ed for his patient belay and encouragement, and to Robin to have inspired me to such a marvellous route.

Note: All the photos are taken by Masa, unless otherwise stated. The original photos are found in my Flickr page, as well as Bowline CC Photo Pool in Flickr.