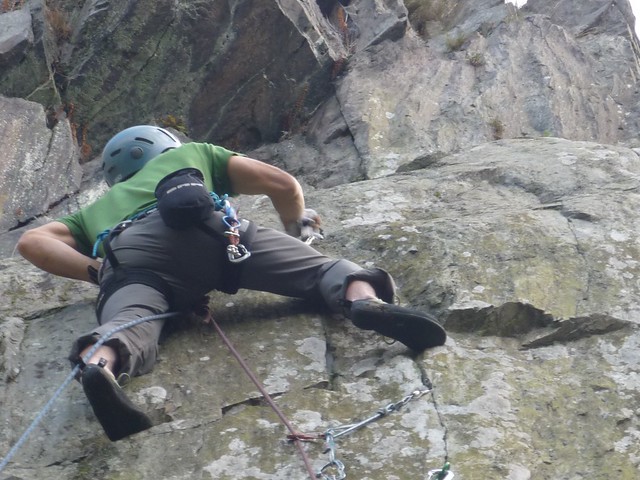 Masa before the upper crux of Zakuro
8 years ago ago at , Swithland, England, United Kingdom by Masa Sakano. ©

Masa on Zakuro during the first ascent, fiddling around with the marginal gear. He had learnt and knew what gear and size and where are the best from his prepractices. However on this occasion of final leading, he stupidly mistook a piece of a certain size from a different manufacturer, consequently the size was wrong. The gear, a micronut, would be marginal at best anyhow, but it is even worse than what it could and should be and is now no more than psychological… The gear placed under the right foot is a small pecker. The second crux is still to come. [© Graeme Baxter]

"What's the next move?!" I asked myself.
I have practiced the move so many times, yet for some reason in this final leading attempt, I can't recall…

The last and only meaningful gear was 4 metres below — as many as 4 pieces — loads in terms of quantity, but the quality is questionable: a small pecker, micro-cam in a shallow seam, micro-nut placed side-way, and slider-nut placed vertically. They are more than adequate gear for aid, but how good are they to arrest a leader fall? To spice up things even more, a grass-covered little ledge is down there, which I would likely hit should I ever fall. OK, if I hit the ledge during a fall, that will slow me down and in turn there will be a more chance the gear holds the fall to stop me from decking, but that option does not appeal to me much. In short a fall from here is not an option.

I know this move is hard, as well as pretty insecure. However I have never fallen off here during my practices, of which I lost the count of repetitions. I have done even a couple of different sequences here during my practices; admittedly some are better than others, but the point is all have worked without any failure — in the past. 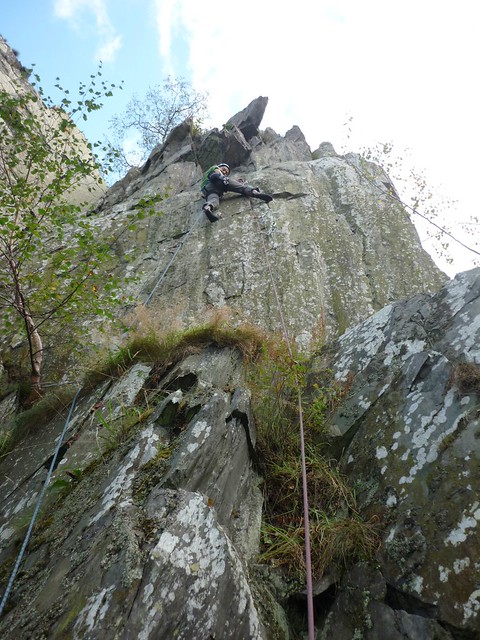 Masa in the first ascent of Zakuro
8 years ago ago at , Swithland, England, United Kingdom by Masa Sakano. ©

Masa on Zakuro, The Brand, Leicestershire, during the first ascent. He does not know what he is going to encounter shortly after this moment. [© Graeme Baxter]

Today I have already bagged a new route at E5. The head-point went really well, in fact, more easily than my naive expectation. That has upped my confidence. I can do it. And I know this route is easier than that, or at least, was. Moreover, I have already done the crux of this route a few metres down. How come I am struggling now?

Only I need now is a couple of more moves to reach better holds above with much coveted gear, followed by easier top-out. Then, the job will have been done to establish my second new route in The Brand, Leicestershire's premiere crag. I have worked hard in the last few weeks for these two routes, commuting in the evenings and weekends to clean and practice the routes, despite frequently beaten by the wet condition in British autumn. And to finish off the preparation and to make 100 per cent sure, I have made the final recap by top-rope only less than an hour ago.

Yet, somehow I don't quite remember the sequence of the moves now. Why??! Now is the time I need it the most and desperately… I can see a slanting small hold at a waist height. But how could I place a foot on it? It looks too high. I have forgotten the move…

Maybe dynamic move to rock over on it, instead? No. After a heavy rain last night, the rock is, although looking dry, not in a perfect condition, and is still a little greasy. Dynamic move onto a slanting hold of damp slate will be a recipe for a catastrophic fall.

Maybe stiff one-arm pull, relying on the few milli-metres-thick edge high up, instead? I have tried the move in the past, and it did work. Tempted, and actually I have already half-heartedly tried to attempt it twice, but today my finger tips sense the micro amount of moisture on the edge and I am not sure if my fingers stick on it long enough.

Both my feet are on tiny slanting holds via a friction-dependent side-push in a kind of bridging position rather than simply standing on them. I have already readjusted my foot once, as I felt the foot was slowly sliding. That is an indication of how greasy the rock is today, as I know readjustment here would not be needed if the rock was bone dry. A memory a few minutes ago also flashes back to me; further down at the low crux, my right foot popped off once, but I just managed to cling on the rock to death, and kept staying calm and climbing on. But now, not knowing what to do next, realisation of slippery state of the rock at present and fear of the potential risk are creeping into my head.

I feel the same foot is again slowly sliding. (Later my trusted belayer Graeme testified he could see my foot had been slipping gradually and at that time was holding on the tiniest of tiny part of the foothold, and he thought it could pop off at any moment.)

I don't have much time. Time to make decision. Upwards, somehow. Climbing down from here is not an option, having completed a series of irreversible moves to get up here.

I started moving. Suddenly I spotted another small slanting hold 20cm below the hold at the waist height. Ah, that's the foot hold! In no time I press down my hand on the waist-height hold, slowly raising a foot towards and onto the "rediscovered" hold, while my full attention is kept on the other foot that has to maintain the vital contact with the rock.

I completed the move, at all last.

A couple of minutes later I stood at the top of the route.
The route was bagged, and a new route was established.
It was a lot more mentally sweating experience than I had anticipated.

A thin and technical wall climb on the straight line at 1-2 metres left of Happy Flute and 3-4 metres right of Mango. Start climbing the second groove 3m right of Mango to reach the grassy ledge at 4m. The route goes on the head wall straight up, initially just right of a hair-line crack 1m right of the triangular block and 2m left of Flute, then follow another hair-line crack above. If you successfully complete the absolutely desperate opening move above the grassy ledge, take time, search for gear and summon all your skill, knowledge and small/tiny gear in your rack, including the unusuals (slider-nut, pecker etc), to make sure the runners here are as good as possible. Intense wall climbs follow, culminating in a very thin balancy move (unless you want to use jugs on the left to escape to the adjacent route!?) well above the last reasonable gear to reach the final vertical wall and welcome gear (Note best not use the obvious crack of small-size nuts behind the loose-looking flake on the left there. Hunt more solid ones instead). Finish either as in Happy Flute by traversing to right, or direct (not recommended as the state of the rock there is questionable). You may want to add a grade in any but the driest condition.

Acknowledgement: My first thanks go to Graeme Baxter, who offered me a help on the big day and patiently held ropes in between his busy schedule, ignoring(?) his nagging wife. I was lying on the bed in the morning, having failed to find a climbing partner, deeply disappointed while seeing the rare blue sky on the day, when I received his call to respond to my call for help. The day could have been wasted without Graeme. I am grateful for Lee Parsons, who had altruistically came to help me in my previous attempt of head-pointing, setting off at 7am, bringing photo-shooting equipment, which ended in vain due to unexpectedly damp condition. But I had a valuable opportunity to try the routes on top-rope rather than usual shunting, and the experience was a great help for me. I also appreciate Robin Richmond's enthusiastic encouragement, which has given me the inspiration of new routing in general and climbing at The Brand in the first place. I sincerely wish his swift recovery from the injury he is suffering from at the time of writing.

Note: All the photos are taken by Graeme Baxter and all rights are reserved. Click each photo (which is linked to the Flickr page) and you can see the original photo as well as its detail, including the copyright and licensing.