The Brand — Leicestershire's premium crag.
I have established two new routes there recently (see Part 1 of this article). What is next?
One more!

Not surprisingly The Brand has been almost fully developed, crammed with routes next to each other. I was excited when I spotted a clean face and realised it seemed free of recorded routes. After a quick inspection I drew three potential routes, among which the left-most appeared to be the easiest. I practised repeatedly on the two harder routes on the right first, and successfully headpointed them a few weeks later.

Now the seemingly easiest one is left, with my estimate of the grade of E1/2 5b, or HVS climbing in the underprotected situation (which is kind of confirmed in another source, as explained in the footnote). I have not practised it, aiming to do the first ascent ground-up. It's gonna be a fun!

A week after I had made the first ascent of the other 2 routes, I visited The Brand to finish the job with Paul.

I realised before the climb, I had forgotten a chalk bag and a few gear in the car. But I didn't bother going back to fetch them, thinking this route must be easy enough. Having completed two other harder routes on this wall, my confidence level was high. Indeed I had been even tempted to solo this route in an evening to dispatch it swiftly.

Off I went, less than ideally equipped. I climbed up towards the estimated crux above the comfortable ledge. The rock was dry, but still kept a bit of moisture and was felt fairly greasy, where lack of a bag of chalk did not help. After a couple of failed attempts of the crux move, I climbed back down to the ledge. I tried again, and I climbed back down again, or tried to — my foot slipped and I got airbourne, ending up 1 metre above the deck…

I can't believe it! How come! 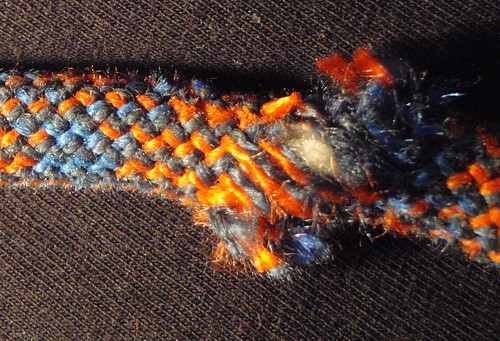 The damaged rope after Masa's taking a fall in his first leading attempt of the route to be Fruit Eliminate. [© Masa Sakano; Creative Commons license — click the photo to see the detail.]

As soon as I climbed back down to the ground, stripping the two runners(*) on the way that had held my fall, Paul pointed out one of the ropes was damaged. Indeed! The sheth was cut through completely — presumably it was caught on a sharp edge of the spike of this slate rock… Well spotted, Paul, much appreciated!

Note(*): It is necessary to place all the runners on lead to claim a clean ascent. Therefore, if you fall on gear, you have to start climbing again from the bottom, after stripping off all the gear, in the modern free-climbing ethics.

Anyhow it did not bother me. This climb must be easy, the fall was just because of lack of appropriate concentration (I thought). The fall has woken me up. I have no doubt I will not fall again. I simply retied the rope beyond the damaged part, and started climbing straightaway.

My estimate was right — well, to some extent. I successfully made the crux move this time and reached a good hold above. Then I found it was hard to commit to climb above, being unable to trust the slanting small footholds in this condition, while feeling my feet slipping…

I looked down. Although the last two gear themselves are bomber, I'm higher above them, and so they may or may not stop me from decking. In either case there is a good chance I'd hit the pointy rock on the ledge while falling (which damaged the rope in the fall just a moment ago). I know well I was lucky not to hit it when I fell off. In addition the fact one of the ropes was badly damaged in my previous fall was discouraging.

The finger edge I'm holding now is good, nevertheless the steepness of the wall means fatigue is now kicking in. I am frantically shaking my arms alternatively. I wish I'd brought a skyhook, then at least I could get a much needed rest on the edge… By this time I have given up climbing this route. If there were another climber, I would be willing to call for a help to give me a rope from the above. In reality there is absolutely zero chance for it in this secluded crag. I regret my underestimate of this route.

Down should I go.

Before the climb I thought this route would be easily escapable by traversing to the left to the prominent corner crack of Mango. I found my guess was wrong at this crucial moment. The corner crack looks so close yet is impossibly distant to reach, no different from the hold above I was aiming to reach up from here in that sense… I have no choice but to climb down, reversing the moves, through the difficult section, where I have fallen off a moment ago.

I am now fighting for life. Desperately.

Some intense time passed. Almost eternal for me. In the end I somehow managed to climb down to safety. My head is resting leaning against the wall. Breathing hard. I don't remember how I managed, but it was certainly close. Paul later testified he thought I would come off.

I have survived. We left the crag.

Two weeks later I went back with Brian. In the walk-in I observed my mind and realised my confidence was not there. The failure two weeks ago obviously tainted my confidence. I am feeling a fear my foot might slip without warning, maybe… In addition I have had a couple of confidence-denting experiences in the last two weeks; I fell off repeatedly and even failed to top out on a VS, fell off on a HVS and backed off another HVS. It did not help boost my confidence to lead an unknown and underprotected E1/2 route ground-up. Practically I was crippled.

But at least the rock was dry. The cool temperature meant the fricition was good (or as good as slate could offer). I just needed a serious warming-up both physically and mentally. So we started the day slowly. By the time I had climbed two easier routes up to HVS, I had regained the familiar feeling with slate rock, and so back came my confidence. The last week's bad luck must be down to the rock condition. Nevertheless I must not make the same mistake — underestimate. Chalk-bag is here and so is all the marginal gear ready on my harness. This time I am well prepared. Masa looking at the crux move on Fruit Eliminate, The Brand, Leicestershire. Belayed by Brian. [© Annabell Ison; All rights reserved]

Once started, I reached the high point two weeks ago smoothedly without any fuss, which means I have passed the crux. Now, the move above would not be any harder. I see a few good holds! Only the trouble is they all seem to be either at a wrong place or wrong angle, it has turned out after a close inspection…

But this time I can place a skyhook now! Unfortunately the placement is dodgy in even the skyhook standard, as the shape of the edge, on which it is hung, is not ideal or horizontal. Nevertheless it is something, well, optimistically speaking.

After a couple of up and down attempts, I tried a wide-leg posture. Maybe it works? But I wasn't sure, so I climbed down — or tried to. Shhh…

My left foot slipped and right foot followed, and I am hanging on just a left-finger edge. Thank goodness, I am strong enough and did not end up testing the skyhook! It is a vivid realisation of what could happen.

After a deep breath, I looked down. Brian the belayer below looked still normal and showed no sign of concern. That was kind of reasurrance to me. In fact, what Brian did not know at that time was the last runner was a dodgy skyhook, which he later testified he had simply assumed to be a wire… (I wished!)

Why did my left foot pop off? I knew the answer. The left-foot hold I used was a 70-degree heavily slanting side-edge (of slate), so the angle of pressure applied is absolutely crucial. Any sloppy approach would be severely punished. Now I have forgotten the estimated grade. It is irrelevant. I am concentrating purely to make the best effort to overcome this section in front of me.

So did I, committed. Precarious and technical moves.

Relief. But only to some extent. Finding no trustworthy gear means the situation now is even more serious. At least the climbing above was easy or easier at last, as expected. Some minutes later I topped out.

After all it has turned out the move above the skyhook, not below it as I had expected, was the hardest. 5c. That explains why I felt it to be hard and could not do it two weeks ago, when the rock condition was not quite good. E1 5b? No. Way harder and more serious than that.

A lesson is that one should not underestimate the difficulty of the route, particularly when the grade is unknown or suspicious, and should give the route the appropriate respect it deserves and make the best effort always, lest you would pay a high price one day.

Squeezed eliminate between Mango and Zakuro, but the climb is surprisingly independent. Start at the groove 1 metre right of Mango and climb straight up on the face all the way with sparse but positive holds, keeping 2m right of the corner crack of Mango. Bold.

FA: unknown. The previous guidebook mentioned a climb on the wall to the right of Mango at E1 5b, but claimed it to be not worth including. No more detail is available. Reclimbed by Masa Sakano and Brian Quinn, 27th October 2012 in ground-up, after cleaning by abseil. 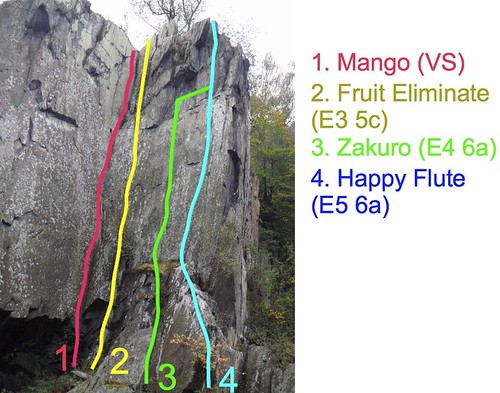 Topo of Fruit Wall, Dry Wall Area, The Brand. [© None]

Acknowledgement: I thank Paul McQuade, Brian Quinn and Annabell Ison for having come with me and helped to establish this route. I am also grateful for Robin Richmond's continuous update of Leicestershire Climbs website (http://www.leicestershireclimbs.co.uk/) and works related to the forthcoming new guidebook of climbing in Leicestershire.

There is a statement in the current (rather outdated) guidebook:

To the left lies an obvious corner [Mango]. A route has been climbed up its right wall at E1 5b but is not worth recording.

This suggested route seems to be in agreement with the route I climbed, Fruit Eliminate, E3 5c. There is an apaprent inconsistency in the grades. However Fruit Eliminate is the easiest line on the right wall, independent of Mango. Therefore they are likely to be identical with a difference in the subjective views of difficulty and seriousness of the route. Or, there is a possibility that the route suggested in the guidebook may climb up Mango first before traversing right to the face after the crux of Fruit Eliminate, with bomber gear in the crack of Mango, which would be closer to E1 5b. The description in the guidebook, as cited above, does not mention any detail, and hence the truth is unknown.

Note: All the photos in this article are taken by Annabell Ison, unless stated otherwise, and all rights are reserved. Click each photo (which is linked to the Flickr page) and you can see the original photo as well as its detail, including the copyright and licensing.