One can't possibly miss such a nice weather window. Unfortunately some of us had to go back to Leicester after the first few days due to work commitment etc, however Andy, Doug and Jon came back to Cornwall for the second weekend, each of them driving, not minding the total mileague of over 1000 miles! Cornwall has such a powerful attraction! 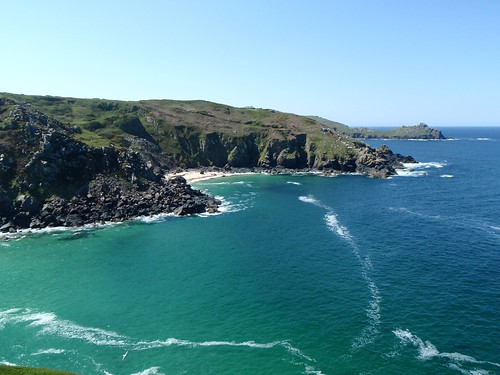 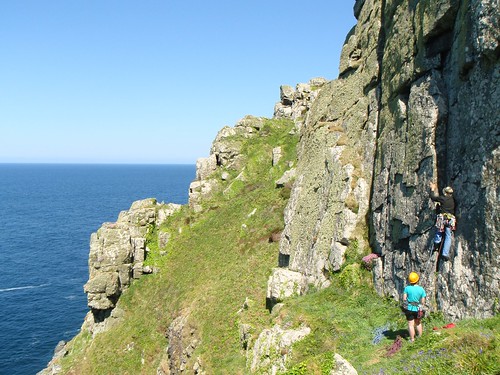 Zennor Cliff on a sunny day in Spring. Doug leading The Royal Forester (VS), belayed by Jo.

During the meet all of us had their moment. Personally I have learnt how to save my skin, staying on the coarse granite day after day. Jon made his first trad leads after a year of break following his unfortunate accident. Michelle's coastal bike-ride followed by a run every morning, before other lazy climbers even got up, was admirable. Loz's culinary skill, devotion (of bringing his own set of kitchen knives) and nose for good fish and fresh Cornish strawberry certainly impressed many and made the meet happier (Bless him!). Ian made, or was forced to make, a very good effort to attempt to second a classic fingery E3 in Sennen after his kind offer of lead ANY route you like to Masa (many thanks to Ian, that made my day!). Tony too was motivated to push himself a bit more than usual and lead a classic VS in Bosigran when he ended up teaming up with Masa, and I believe he was content. Lastly but not least Zoe did a fantastic job to organise us, a group of selfish climbers or a herd of cats (by Doug).

As such there are endless stories, but here I am describing only two things, which gave me the most vivid memory: Jo's achievement and my own experience. 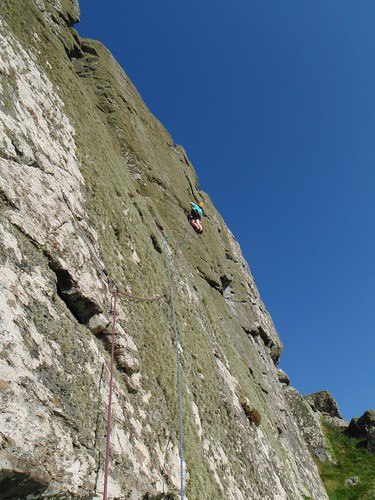 In terms of the achievement during this meet, Jo impressed me the most. Allegedly she used to lead up to E1s, but had been off climbing for a few years. And her performance on grit, which to be fair is not her preferred rock, seemed to me to indicate her recent absence from climbing. In particular her confidence level looked rather low — but only until the end of the first day of her climbing in Cornwall. Having cruised in seconding VSs and a HVS, she decided to lead a long diagonal HS 4b, Cross Town Traffic in Zennor Cliff. It being a diagonal line, each runner should be well extended and any fall would result in a big swing, as you can see in the photo. It was not for faint-hearted and was more like VS. Yet she lead it casually with full of confidence. Doug's word said it all Wow, I wouldn't lead it…

The following day was another step up. After she had seconded an E1 casually, I asked her
You could've lead it, couldn't you?
Yes, I could have. said she.
Then immediately Jo proved her own word, though not without a small drama. She first lead a HVS casually and then straightaway jumped at a big classic HVS, Saxon, in Carn Kenidjack, even choosing the poorly protected direct 5a start.

At 3 metres above the ground with a bad landing, came the crux and she successfully made the move, grabbing the good hold above. Now 4 metres above the ground with no gear. A big break, which should accept protections, is still a metre above. Jo halted. Falling is not an option now, however the next move to the sanctuary looks obvious and must be easy, a lot easier than the move she has just made. That is the logic, but logic does not always appeal convincingly enough to the person on the edge. Her legs started playing disco dance.

PP said Climbing is all in the head. Now it is her moment of PP's word.
STOP, my legs! shouts Jo.
Apparently her legs have their own idea and refuse to stop disco-dancing. I talk to her.
Your hand hold is very good, isn't it? Don't worry, you wouldn't go anywhere unless you decide to let it go. Take your time.
Deep breath. Thanks. replies she. Her legs seem to be tamed a bit now. At long last she made the move and reached the break without the slightest trouble. Placed a gear. A moment of relief came to both of us.

Jo then moved a tiny bit but stopped to place another gear. Sorry. said she. I laughed in my heart, thinking It is very Jo, so apologetic, while actually talking to her in a bit serious tone No worry, Jo. Place as many pieces of gear as you like. It IS important to boost your confidence, seriously.

The rest was comparatively straightforward, though Jo later confessed she was scared. Anyway, Jo (half inevitably) chose the harder direct finish (5a), and eventually reached the top. As such, Jo onsighed two big HVSs, which was nearly her top grade when she had been active, in a space of a couple of hours, after a long break from climbing. Hat off to Jo! 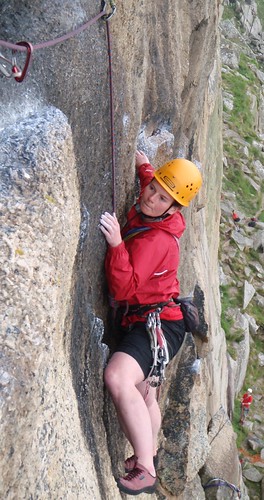 Jo seconding P3 of Suicide Wall, Bosigran, the infamous traverse pitch (5a). To reach the break (where the gear is seen) above from here is a hard move. Lead by Doug, belaying.

I am scared. I am waaaay above the gear. Fear and doubt are kicking in me. The rocks all feel greasy. The seemingly flat jug above, which must be the end of this crux section, is just out of my reach. There is no hold to pull on. Maybe dyno? Tempting — it is an easy and swift way to bring this head game to an end. No. Far too risky. That means I have to step up, and to do that I need swap my feet first, putting the right foot on to the left foothold. But my left foot, even though it is on the reasonably good hold, is somehow already gradually slipping. The temperature is too high. Rocks are too greasy. I can't match or swap my feet…

No, it can't be. It is only 5b. Can't be that hard. Relax. I can do it. I have stayed here this long, so I can stay longer if I wish. Relax. OK, I have just found another foot hold, so I can do the move without swapping the feet now. It is only 5b. No problem. Heel down. Trust the friction. Go, yes, OK, go…

— The next thing I found was my belayer Doug hanging level as me a couple of metres above the ground. Jesus! shouted Doug. I looked up and shouted Jesus!, realising the gear that had held the 9-metre fall was a humble skyhook, after I had pulled out the top gear, which was poor anyway, by instinctively grabbing outward while I was falling off…

Are you OK? Would you like to be lowered down? asked Jo. No, no, I am fine. I'll climb again., replied I.

I was terribly upset, disappointed and angry. I knew this would be a poorly protected route, so I shouldn't have fallen off, I really shouldn't, I knew that, yet I fell off. I was angry. And it was mere 5b. I could reverse 5b moves if needed, that was the justification to jump at this serious route first of all. And how could I fall off a 5b move? The fear factor must have kicked in, and prevented me from performing normally.

What a feable head of mine! But I know from the experience I can perform far better once I fall off. After all it is only 5b. I now know the moves, too. It must feel pretty easy and straightforward this time. To give up such an easy route is of course unthinkable, so I am climbing on.

After Jo quickly took over the belaying role from Doug, I got back straightaway, reclimbing practically the entire length of the route. I placed two more gear above the skyhook this time — poor BD micro-stopper No.2 and RP1, which must be good enough to hang a chalk bag. Then the crux sequence comes. Surprise. It still feels hard! Can't be! It is only 5b! After experimenting a few move possibilities, I finally commited to a precarious move, where the balance and friction are everything.

I reached the jug above somehow, mantling to the easier ground, at all last.

— Looking back at it, I now conclude the crux move, which comes right at the end of the hard section, was indeed way harder than any other move in the route: friction-dependent and insecure solid 5c for me, and would be the hardest move I could do on the day like this with high temperature and humidity, though it is pointlessly easy for the climbers with the standard reach, for they can just reach the bomber hold, as Doug did in seconding. The given grade of E2 5b for The Chickin Run must be fair. However it happened to be E4 5c for me, (very) shortie, and the condition on the day was not in my favour, either…

A famous female climber (Lynn Hill?) with a short reach said The grade does not make a lot of sense to me. It is the same for me; the technical grade often is a mere indication of how easy it could be at best and NOT how hard it would be. I can manage with a vast majority of easy-grade routes nevertheless though I sometimes need to invent a harder move than supposed-to-be that is still well within my capability. However, as the grade becomes close to my limit, invented alternative moves tend to be too hard for me.

The fall in this un-fallable route makes me think what to do to avoid such epics. It is a difficult question and I haven't yet found the final answer. Anyhow every cloud has a silver lining — in this case I am likely to meet more surprise than most of climbers, and at the end of the day that spirit of the adventure, namely dealing with unknown, is what climbing is all about, isn't it? 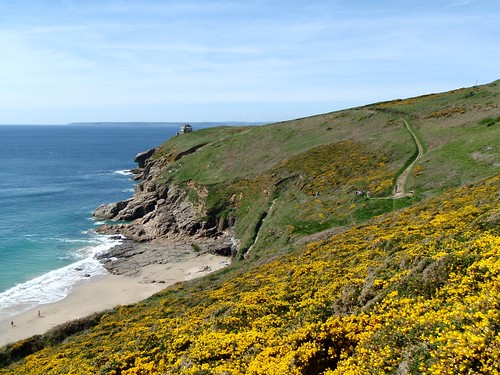 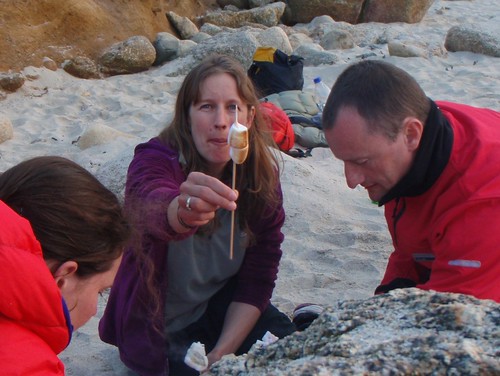