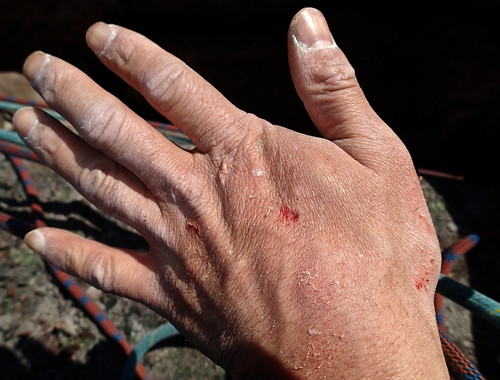 Wrecked hand after P1 of my first route of the day, as I unexpectedly encountered a hard section that needed a hand jam. The following P2 was still not easy and needed hand jam, too, which messed it up a little more. Later looking up at the bottom of the route of the day, Unleash the Beast, I judged it would not need much hand jam, so I didn't tape up the back of my palm. However, hand-jam was again found to be very useful as I got on, so I had no choice but shoved blood-stained hands in the crack repeatedly. That didn't help my morale. Excuse, excuse…

I fell off. Onsight was blown.

Then after a little rest on rope, I went back and tried the plan B without even touching the hold I had attempted to get a moment ago. It worked well and before long I successfully topped out without great struggle.

The thing is I had still enough strength in my tank when I took a fall. I could have held on longer if I had wanted, and searched for the alternative, when the original plan turned out not to work. However when I found the hold was not usable contrary to what I had optimistically hoped, I just let go. That is the sole reason I fell off.

said Jerry Moffatt. How right he was! I have never appreciated it as fully as this day.

As it turned out, the plan B wasn't desperate. In fact the plan B was the most obvious move from below and I knew it. It just appeared to be a little harder than the move I committed to first, assuming (optimistically) the hold above I reached for was decent, which is not (at all), as it turned out. Then the only thing I should have and could have done was, as soon as I realised the hold wasn't good, to hold on hard and tried the plan B or whatever I could do next.

I did, far too easily, so I fell off.

If I had given the best shot, and if I had still fallen off, that is fine. That just means as a (maybe brute) fact, the route was simply beyond my ability (and maybe luck) on the day. Or, in this case, there would have been a good chance I would have managed to make it, considering what I later found.

Rock climbing is to me a challenge to push my boundary in large part. If I simply give up when I face a challenge, what's the point of climbing?

If there was a great risk associated in taking a challenge, that would be of course a different story. However in this case I knew the risk would be the minimum. Then if I had tried harder, I could have made it without falling and testing the trad gear, and so by definition it would have been marginally safer.

With such a coward attitude, there would be no chance for me to progress or push the grade. And as I understand, that is one of the major differences in attitude between good and poor climbers; the former can, and do regularly, dig deeper than the latter, be it in actual climbing, training, or motivation-hunting.

When I realised what I had done after the climb, I was terribly annoyed with myself.

An important lesson is learnt.

I swear to unleash the beast in me next time. 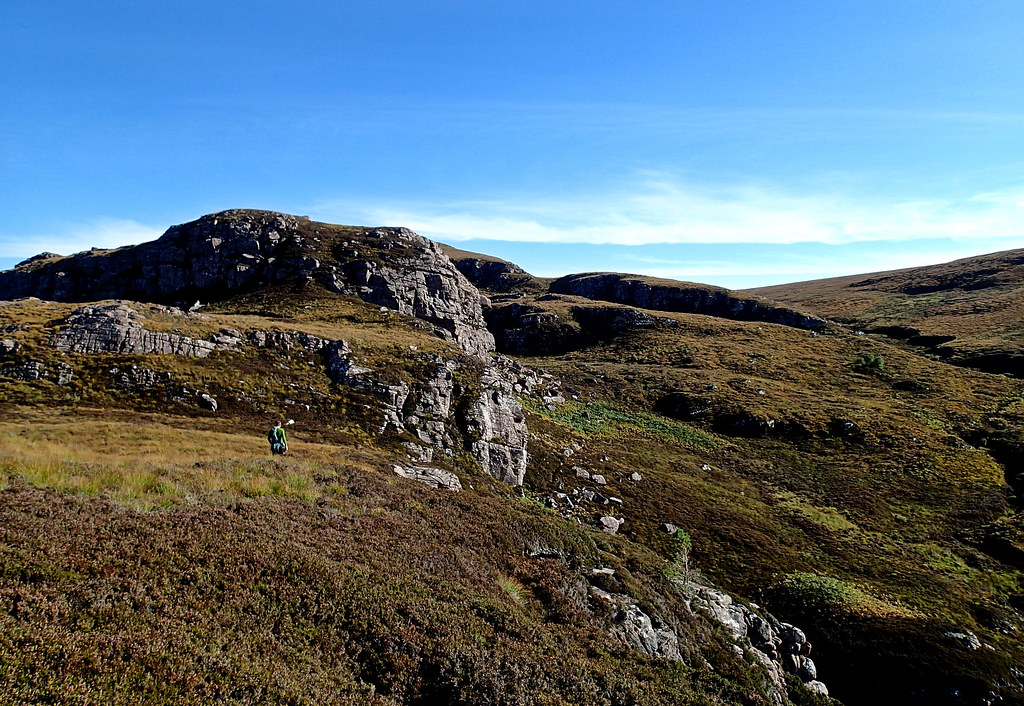